Our Bikademy Students, Igor and Kristina Cerin, told us their cycling experience when they cycled 130 km from Sveti Filip i Jakov to island of Vir.

For several years now, we have been spending our vacations cycling and exploring new places and roads. Our longest 130 kilometers drive on the Adriatic was from Sv. Filip i Jakov to the island of Vir, a bike tour of the island and back.

Like many cyclists, we always choose alternative, less busy routes and we try to make them as circular as possible.

That’s how our trip started – through Ravni kotari, followed by macadam roads along the Zadar airport towards the city of Zadar.

A small section of the Adriatic highway and hop, we are on the bike path that stretches for several kilometers.

Ahead was the main road to reach the Vir bridge, which is short, but with a slightly steeper climb where you have to pedal harder, since the bridge is quite busy and has somewhat narrower traffic lanes.
We decided to visit all the sights on Vir. Duboka Draga beach, which locals also call Red beach, bunari (wells), which are a significant source of fresh water and associated with many stories, and we jumped to Kaštelina, a historical Venetian fort right by the sea, although to reach it we had to go through the thicket on the path.

There are lots of concrete constructs on the island, but the beaches and viewpoints are beautiful, with an even more beautiful view of the island of Pag. The two of us experienced it in a completely different, opposite way, but what delighted us both was that the island is full of cyclists and has marked bicycle lanes.

The island is quite small, you can get around it in an hour and it doesn’t offer too much to explore, but everyone can find something to enjoy there.

On the way back, we passed through Privlaka along the marina and the promenade, after which we returned to the bike path, and through Zadar on the Adriatic main road all the way to Sv. Filip i Jakov. 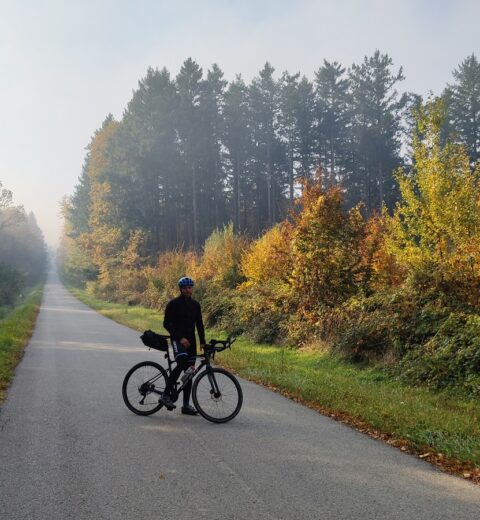